Corvette Fest 2014 is now behind us and we, the Members of the GMC Corvette Set, are showing our Corvettes at the many other Corvette Shows in the Area.

June 14, 2014 was the 10th anniversary Corvette Fest Show at Canturbury Village. This is the GMC Corvette Set's Annual Corvette Show to raise money for our Charity of choice, Leader Dogs for the Blind in Rochester MI. Wally Edgar Chevrolet and Canterbury Village are the major Sponsors that make Corvette Fest possible. We also appreciate the many Corvette Owners that entered their Corvette into the Show. We know that many of you toiled into the night preparing and detailing your Corvette.

Fox 2 News interviewed some of our Members, earlier in the week, starting the fun and excitement of Corvette Fest. Please follow this link to see the Fox 2 Article.

The weather was perfect on June 14, 2014. There were over 80 registered Corvettes as well as approximately 50 Member Cars on display. The Registered Corvette Owners competed for 'First Place' and several 'Outstanding' awards in one of 15 Classes. In turn, the Corvette Owners examined the Member's Corvettes and voted for the 'Participant's Choice' Awards. The GMC Corvette Set is a Charter Member of the September Motor City Corvette Concours Show (MCCC); accordingly, we nominated several Corvettes for the MCCC consideration for the 'Best of the Best Competition'.

As usual, the Corvette Fest judging is fair and intense. The judges pride themselves in noticing any smudge or speck of dirt. This year they had to ask 2 of the participants to 'Please open your glove boxs.' in an  effort to seperate the First Place Corvette from an Outstanding Corvette in that class.

The Corvette Fest Silent Auction was a resounding success. The Donors were generous and the bidding was spirited.

New to Corvette Fest was Diane's Face Painting tent. She painted the faces of children young and old from early morning to late afternoon. We overheard a man say to his daughters 'Okay you can have your faces painted and then I want to look at the Corvettes'.

Joe Johnson of Orion Neighbourhood Television was at Corvette Fest and prepared this documentary. ONTV Documentary

This is an overall video of the 2014 Corvette Fest. The video includes snips of the Face Painting, the Corvette Fest Band, Judging, Silent Auction, the Action at the Club Tent and the Awards Ceremony.
Corvette Fest Overview

We hope to see you there. You will be able to pre Register for the 2015 Corvette Fest late February to early March 2015. 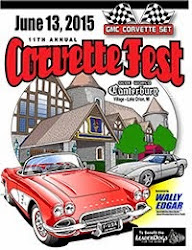